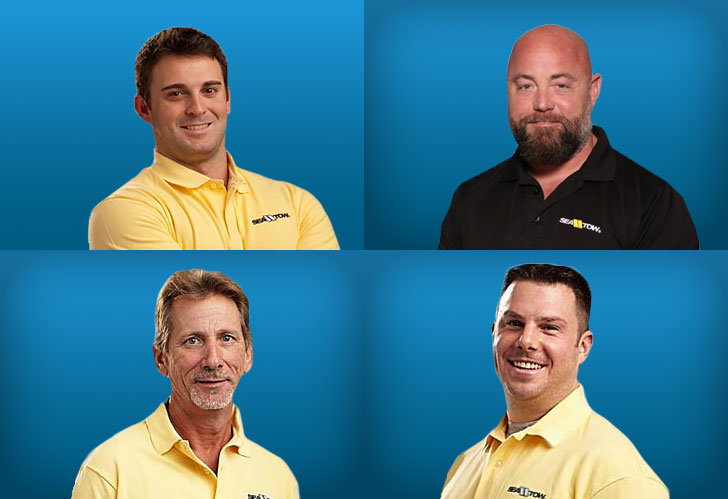 Sea Tow is much more than just Peace of Mind on the Water™. As the leading provider of on-water assistance, our Captains know a thing or two about premier service. This month, four Sea Tow locations – Sea Tow Central Texas, Sea Tow Cape May, Sea Tow Great South Bay and Sea Tow Marco Island – are celebrating notable milestones with a combined 50 years of service.

As a fourth generation merchant mariner, Capt. Mike Kern of Sea Tow Central Texas lives for the water. Now he is celebrating his 10th anniversary as owner and head captain of the franchise that services multiple lakes in Texas.

Capt. Kern had always known of Sea Tow through his various maritime positions along the Gulf Coast. When Kern’s brother Capt. Billy Kern bought the Sea Tow franchise in Galveston, Texas in 2009, it was only a matter of time until Capt. Mike found one of his own to operate.

“My brother and I each wanted to find our own endeavor,” Capt. Mike said. “I thought Sea Tow was the perfect combination of my passion, trade and desire to always be ready to help those on the water. ”

Similarly, boaters in the Delaware Bay and offshore in the Atlantic Ocean can relax and enjoy boating knowing that Capt. Jack Moran, owner of Sea Tow Cape May (NJ), is standing by. Over the last decade, Capt. Jack and his crew have established a reputation of providing reliable, superior service.

“You can put anybody in a boat and send them out on the water but it takes a vast amount of training and attention to detail to do it smoothly,” Capt. Jack said. “We take our jobs seriously and have a well-seasoned team with a meticulous system of checks and balances to offer the best on-water assistance available.”

Capt. Jack has been working with Sea Tow for almost 25 years, first as a captain, then as owner of Sea Tow Naples (FL) and most recently purchasing the Cape May franchise ten years ago to be closer to family and friends.  For he and his crew, the job is made even more satisfying by the incredible community surrounding them.

Capt. Ryan Bayley, owner of Sea Tow Great South Bay, is celebrating his 15th anniversary and shares similar sentiments when it comes to his local community.

“Being able to do something I love to do – being on the water and helping people – is a pretty good feeling,” reflected Capt. Ryan. “Over the last 15 years, I’ve been able to give people added peace of mind on the water, and I’ve enjoyed it all.”

Educating the boating community in Great South Bay is important to Capt. Ryan. He and his team manage the Sea Tow Great South Bay Facebook page that provides tips and advice for boaters in the area, and it is recognized as a valuable resource for their region.

Capt. John McLaughlin and his wife Sandy are owners of Sea Tow Marco Island and are no strangers to sharing their knowledge as they celebrate 15 years of business in Florida. They also own Sea Tow Atlantic City (NJ). The McLaughlins serve as a model of how to successfully operate a business as a husband and wife team, along with their son Eric.

“A lot of husband and wife teams, or owners, of Sea Tow have called us and said they want to do it, but they are worried about how to make it happen,” Sandy said. “We like to say that not everything is perfect, but it can still work. You have to remember that you are together 24/7, not only together in the business, but together at home when you’re not technically doing business. It takes work, but it’s also very rewarding.”

Rewarding – the way in which all four franchise owners agree describes their years of service.